A follow-up from some prior posts.  In late June, I wrote how Thomas Transfer and Storage mailed a moving offer to my post-move address.  Since then, they not only sent a remail of the exact same creative package, they sent a 2nd remail of that package to my new address. Each of the three packages arrived about 10 days apart.

That means Thomas Transfer earns a Fail for Creative as well as List and Timing.  I covered in prior posts that when remailing the same offer, the creative should be modified for additional effectiveness.  If the customer does not open the first envelope, why would he open a second envelope that looks exactly the same?

In the meantime, Texas Home Movers continues its Fail with lack of communication and inappropriate communication.  After making 10 attempts to reach the company to inquire about my damaged a missing goods, filing a complaint with the Better Business Bureau, filing a dispute through Visa, and sending a certified letter to the owner, I received an e-mail reading:


HELLO THIS IS ANITA WITH TEXAS HOME MOVERS AND I AM EMAILING YOU TO LET YOU KNOW THAT I TRIED CALLING YOU TO LET YOU KNOW THAT I WOULD LIKE YOU TO FEEL OUT THE CLAIM FORM AND THE PROCESS WILL TAKE UP A FEW WEEKS TO PROCESS AND THEY WELL ALL US AS SOON AS IT GOES THREW AND WE WILL BE MORE THAN HAPPY TO ASSIST YOU AND INVERSE WHAT WE OWE YOU.FOR ANY MORE INFORMATION PLEASE CALL US AT 1877/878/4092 THANK YOU ONCE AGAIN ANITA WITH TEXAS HOME MOVERS.THANK YOU ONCE AGAIN ANITA. HAVE A BLESSED DAY.

This is not exactly a Customer Service letter, but at least it is personal.  On Friday, I received a call from Anita threatening to take legal action against me for filing a dispute with Visa and the BBB.  Today, the web site appears to be down.  Not a good sign.  Perhaps the entire company is a Fail.
Posted by Marc Davis No comments:

Remember to recall your collateral

Here is an example of a Fail from Safeway for Creative and Timing.  A chronology: 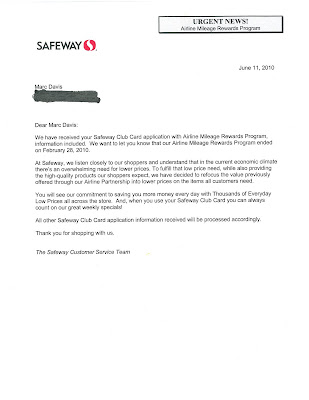 It took Safeway two months to get around to informing me that I would not earn United Airlines miles for my purchases because the program was discontinued in February.  This means that despite the high level of publicity for the new store opening, Safeway did not bother to update their club enrollment brochures - even though the program had ended six weeks before I applied for their club card.

The letter does not express any remorse or regret that a program was offered to me that had already expired.  (Are they suggesting that it's my fault I included my United Airlines frequent flyer number?)  Furthermore, the letter closes by stating that Safeway will process my application.  This means that after two months, the company had yet to take action.

The letter copy itself could be improved:
It's not just brochures that can become out of date -- direct mail and e-mail offers can also expire.   I recently received a packing slip that included a coupon for my next purchase that expired four months before the package shipped.

Learnings: Do not use out of date brochures or other collateral.  If you make a mistake, apologize for it.  The tone of a customer service letter should be active and personal.  If you mention something is included with a letter, include it.

UPDATE 9/21/10
My Subway Club Card still has not been processed.  For the past two months, whenever I shopped at the store I would use their generic card rather than input my phone number.  I called their customer service department and was told that they their processing is backlogged.  Did my application not get processed because they sent me this letter?