GSN Games: Where Do I Put My Quarter?

This letter was sent by “Lindsey” – a manager at GSN Cash Games – to someone who played their games for a while. GSN offers versions of “Wheel of Fortune,” “The Price is Right,” and “Bejeweled Blitz” where players pay an entry fee to compete against other people and win cash prizes. The letter’s recipient played some games, but stopped over a year ago. 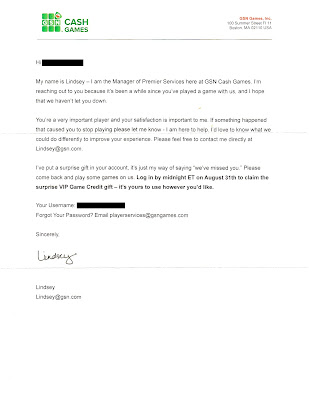 GSN Cash Games sent the recipient periodic emails offering promotional bonuses for playing games again. He opened and read a few, but – after a while – he ignored the emails and condemned them to his Spam folder. With that in mind, a sincere “we missed you” letter of this type sent via snail mail makes sense.

The letter from Lindsey is an attempt to win back a customer. It offers the reader an opportunity to reengage with their site and play some games. There is an offer of game credits, email addresses to write to with feedback, and even an easy way to restore a forgotten password. So, from a marketing standpoint, the List,Offer, and Timing make sense.

While the creative tone appears to be appropriate to the target audience, this is still a Fail for Creative because the letter is missing a clear call to action. The reader is asked to “come back and play some games,” but the letter does not identify the Web site. The recipient had not visited the site in over a year and may not remember the URL. It could have been included in a few places in the letter while maintaining a sincere tone. Some examples:

“… it’s been a while since you visited www.xxxx.com and played a game with us.”

“Please come back to www.xxxx.com and play some games with us.”

Lesson: Be sure your call to action is communicated clearly.
Posted by Marc Davis No comments:

I received a solo letter package from TurboTax on September 30 – a time when Halloween candy is on the shelves at the supermarket. This appears to me to be very early. I have yet to think about what I’m getting my wife for the holidays much less filing my 2015 taxes, but I’m only a focus group of one. On an overall marketing basis, is this a Fail for Timing or is this a smart way for Intuit to get ahead of the volume of holiday catalogs in the mail to reach out to and insulate customers for repeat purchase history?

Creatively, the solo mail package is clean. On the front envelope teaser, there is a clear call to action. The rear teaser has a reinforcement message with an implied savings offer. The inside letter communicates the TurboTax value proposition using several direct mail best practices: Johnson Box, bulleted clear call-outs of features and benefits, and a reinforced call to action. The accompanying brochure breaks down the products – differentiating them in a clear manner while reinforcing the overall and individual product propositions.

Em dashes are used in a few places in headline and body copy. These are often interruptive and can be a good replacement for a comma. But utilizing a triple-dash style with no space often gives the reader the feel of there being two sentences rather than a single broken sentence. Take this line adapted from the outer envelope rear teaser:
Get your biggest refund – guaranteed!
The use of the shorter en dash with spaces before and after creates a better visual flow compared to:
Get your biggest refund—guaranteed!
The latter may be closer to grammatical correctness, but this isn’t a college essay – it is a marketing communication.

It is odd that the first solicitation for the next tax year would be via snail mail, where there is a hard cost of printing and postage. Why not at least start with an email? Intuit has my email address, and it costs nearly nothing to send me a customized email noting my product choice from last year and offering an opportunity to get the same product this year.

The offer is nothing special. There is a vague “SAVE $10*” message in several places. The disclosure on the back of the brochure reads “* Savings and price comparison based on anticipated price increase 3/18/16.” That is not quite a compelling reason to make a purchase now, especially considering the fact that the money-back guarantee applies only within 60 days of purchase. If I make a purchase now, I will still be eating leftover Thanksgiving turkey when the guarantee expires. Not even Ned Flanders gets started on his taxes before the end of the year. The lack of a bona fide customer value for immediate action merits this a Fail for Offer.

Perhaps Intuit was trying to standardize the mailer and purchase process, but, in doing so, may have missed personalization opportunities. For example, I have used the Premier version of TurboTax every year for at least a decade. That would suggest that I have no interest in the Deluxe version this year, so about a quarter of the brochure’s content is irrelevant to me. Rather than explain a likely irrelevant lower tier product, perhaps the focus could have been on resale and upsale.

If you are going through the effort and expense to send a personalized solo mail package, consider having a personalized offer with personalized tracking such as a unique offer code or personalized URL, product recommendations based on prior purchases, and an offer that expires soon. This could allow the customer to not have to complete a long form when repurchasing your product online. Not only will this address the customer based on his/her purchase history and information, you have the opportunity to fully track customer interactions.