When a direct mail marketer takes a successful direct mail package and tweaks it, it is often referred to as "Control Evolution". This is often executed one of three ways:


1.       The nature of the offer has changed but the marketer chooses to retain the creative package. Same creative style, same package, new offer.


2.       The new package goes through an A/B test compared to the existing Control. The winner is the new Control.


3.       The marketer chooses to make changes but does not test against it.
In the case of this self-mailer I received from Chase, it appears that approach #2 or #3 applied -- with some notable changes compared to the solicitation package I received from Chase last summer:
Read more »
Posted by Marc Davis No comments:

Amazon gets ahead of itself

This email from Amazon arrived in the Inbox of a fan on January 7 at 3:18 am, 17 hours before the BCS Championship game celebrating Alabama as the BCS winner: 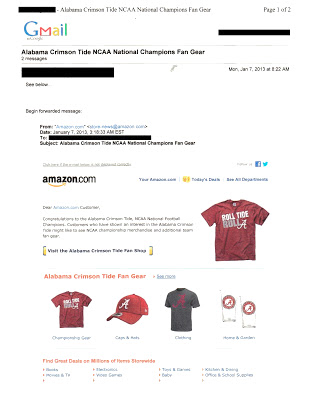 I guess the Fighting Irish not only had to beat the Crimson Tide, they had to overcome Amazon’s prediction.  Amazon could have waited until the game to end, then send out this type of email a few seconds after the Alabama head coach gets Gatorade poured over him.
Props to Amazon for recognizing their Fail for Timing and sending this apology a few hours later: 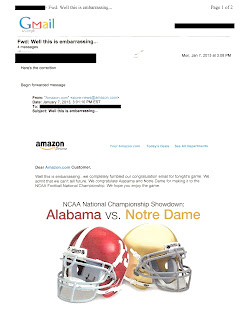 Salesforce is so last year 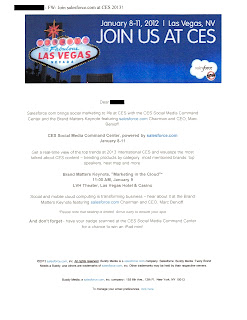 This email from Salesforce.com inviting corporate customers to visit them at CES last week has the incorrect year in the headline graphic.

Some people forget to write the correct year on their checks, others in their marketing communications.

Lesson: Proof every element of your direct marketing communication.
Posted by Marc Davis No comments: