Chase Credit Cards lays an egg with this Fail

Banks are the biggest partners with frequent flyer programs.  Since the introduction of the Citi American Airlines AAdvantage credit card more than 20 years ago, consumers have learned how to accrue enough miles for a free trip just by saying "Charge it."  It is expected today that every frequent flier program is associated with a miles-earning credit card.

Although United and Continental Airlines recently merged, the airlines and their frequent flier programs continue to operate as separate entities.  This means that someone who enjoys the benefit of avoiding the checked baggage fee with their Chase Continental Debit Card would have to pay up if they flew a United flight into Denver.  (In fact, the benefit may not be available soon anyway.  Although the Chase site does not mention it, product information on the Continental Airlines site notes "*The fee waiver for checked bags in conjunction with the Continental Airlines Debit MasterCard will not be valid for travel on or after April 1." and there is a Tweet suggesting the product is no longer offered.)

In the meantime, Elite-level frequent fliers don't know if their perks on Continental or United will be maintained once the programs merge.

Which brings me to the interesting challenge for Chase Bank, the issuer of Visa and MasterCards for both the United and Continental loyalty programs.  Today, they offer different sets of benefits on their United credit cards compared to their Continental credit cards.  That might lead a consumer to wonder which set of loyalty program credit card benefits will remain when the integration of their rewards program is complete within a year.  So why would someone sign up for a card with a $395 annual fee expecting certain benefits only to learn that they were merely short-term benefits?

The letter here is defensive and incomplete in its attempt to address these concerns.  It adequately communicates some of the product's benefits, but fails to suggest that these benefits will be available in the long term.  The opening of the letter assures the reader that "in most ways" the OnePass program will continue as it is today; however it does not affirm that the Presidential Plus program will continue as it is offered today.  That means that this letter could get a Fail for Offer if neither Chase nor Continental/United are aware of future benefits or if they are aware of their intentions to change them by 2012.  Even though it is a credit card solicitation, the letter suggests it is an update on the progress of the merger.  It references "OnePass offers that you will be receiving this year," suggesting that this offer is not the most compelling.  Should the recipient take this offer or wait for a better one?


The letter also merits a Fail for Creative for several reasons:
Lessons:

Geico: Return of the Failed Gecko 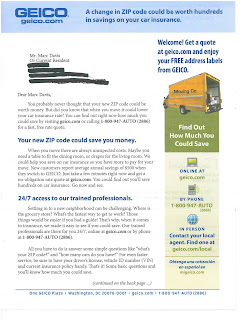 In mid-November, I received a solo mail letter from Geico offering a "Free housewarming gift".  There were a few problems with this.  I had already been in my home for six months.  Creatively, it is exactly the same as the letter I received in August which arrived after three months at my new address.  The only differences between the two solo mail packages were the line breaking in the third paragraph and that the first one included a code above my name in the address field.

It appeared to be odd to reference the fact that I received moved in a mailing that arrived three months after I settled in at a new address, so it is even more odd for the exact same mailer to arrive another three months later.  If the message is off mark the first time, wouldn't it be even more off the mark the second time?

I was ready to give this a Fail for Timing when I noticed in the mail six-month renewal notice from my current auto insurer.  Auto insurance policies typically have six-month terms.  Could Geico have intentionally timed the mailing to coincide with my policy renewal?  If so, Geico should reference the competitor's bill rather than resend the same out-of-date message.  That would be a Fail for Creative.

Regardless, I love those gecko return address stickers.

Lesson: If you are timing your direct communication based on an event, reference that event.  If you missed the event by months, don't even mention it.
Posted by Marc Davis No comments:

A couple of months ago, I noted a Fail for Amtrak for a new loyalty program customer fulfillment mailing arriving more than three months after I enrolled in the program.  In contrast, this new customer mailing from Alamo arrived less than two weeks after I enrolled in the Alamo Insider program.  Frankly, I couldn't tell you the exact number of days it took to arrive because it was included in the pile of mail that was waiting for me when I returned from a business trip.

The package is simple and effective.  It is mailed first class and delivered in a simple #10 outer envelope with Alamo branding.  The letter further represents the company's unpretentious attitude.  It included the loyalty club card (not pictured), a light amount of copy, and friendly graphics.  These graphics use the same friendly style as those shown on the Alamo Insiders web page.

The letter opens with a note of appreciation immediately followed by an explanation of two of the program's features -- deals and value.  The benefit of 10% off rates is clearly communicated in the sidebar.  The letter mentions that "it's fast and easy" to get going, which it is because it is fast and easy for a recipient to quickly scan or completely read the letter.  The letter includes a polite close and a reinforced call to action in the P.S.

There is nothing in this mailing to suggest a Fail.  This is Mail that Sails.  It effectively utilizes its new customer List, beneficial Offer, on-brand Creative, and terrific Timing.  It is worth showing here as a contrast to the oversized Amtrak mailing that took months to mail.  If you are responsible for recurring customer revenue, which method would you use to welcome a new customer to your program: A mailing that was simple and arrives quickly or one that is more grandiose and arrives long after the customer had his/her first experience with your company?