Save the Date, or Save the Fail? 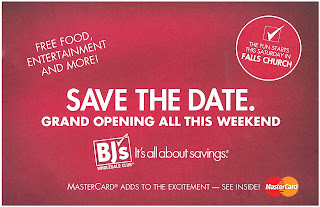 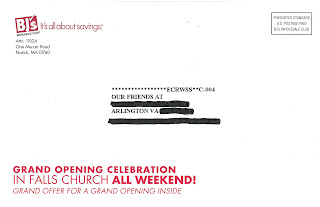 This self-mailer from BJ's Warehouse promotes the opening of a new warehouse store.  This is actually the third in a series sent to the area.  The first was a postcard with an offer to sign up for the club in advance of store opening.  The second was a similar postcard. The third: this self-mailer. 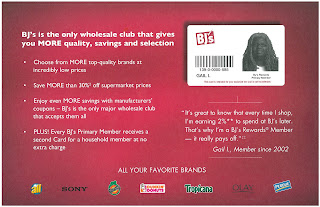 The 3-panel roll-out effectively communicates that BJ's Warehouse Club is going to have a grand opening celebration.  It gives the reader a reason to visit during the opening weekend, reasons to become BJ's customer, and leverages a co-promotion with MasterCard.  It conveys a sense of excitement and savings.

The self-mailer arrived in my neighborhood on October 12, the day after Columbus Day and a Tuesday.  Was it possible that the mail arrived late and the opening was missed?  One neighbor thought that was the case, while another neighbor guessed that because the new location was not mentioned on BJ's store locations page, that perhaps it had not yet opened. 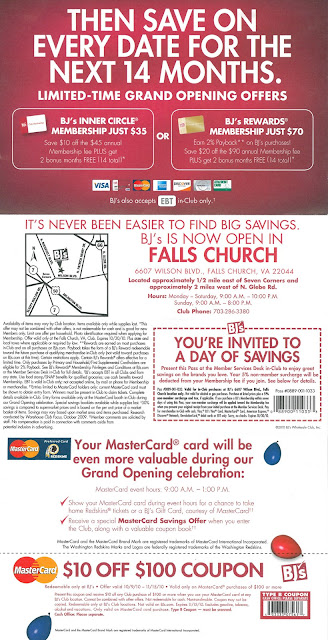 Turns out, they were both right.  The store had a soft opening in early October as well as an official opening in mid-October.  Although it was not clear on the mailer which day it occurred, the Grand Opening celebration and MasterCard drawing for Washington Redskins tickets was on Saturday, October 16.

BJ's was fortunate that the mail arrived and timing was properly managed, but made the mistake of assuming that consumers knew that and also read their mail on a timely basis.  They should remember that some people let their mail stack a few days before reading.

Lesson: Even when timing arrival of your mail with precision, clearly communicate effective dates of your promotion.
Posted by Marc Davis No comments: