Will your mail Fail in 2010? Warning signs that it could

When you hear any of these phrases while planning direct mail, there should be a voice in your head yelling “Danger”:

Think things though ... and have a happy and successful new year.
Posted by Marc Davis No comments:


This 4-page closed face match mailing is similar to long-form direct mail solo packages used by American Express before the credit boom & bust. More recently, it was an offer to upgrade to the Platinum Card. 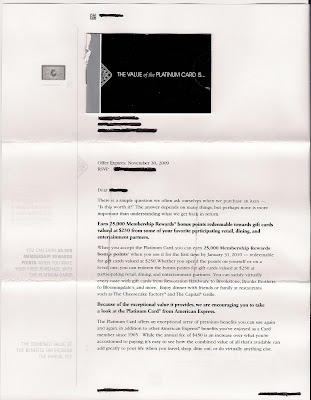 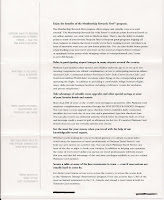 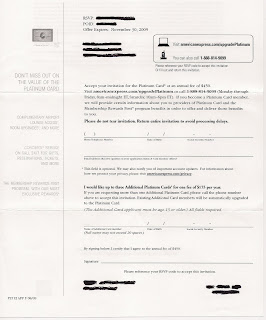 Conceptually, the creative style matches the American Express brand positioning – high end but not pretentious. This might have a basis on Control packages from the 1980’s for the basic Green Card. Each paragraph of the letter has a bold one sentence lead-in summarizing the paragraph below, with summary in the left column that is more tightly worded. This makes the letter scanable for easy understanding of product features and benefits. A prospective customer can learn details of the relevant benefits by reading the full length paragraphs. But make no mistake – this is a sales letter, complete with a signature and classic promotional Postscript.

So what is the ‘Fail’ here? The mini-brochure in the address area of the letter arrived torn, and the first page of the letter had vertical ink stains. This makes the presentation less compelling, especially when asking a consumer to forego $450 a year on your product.

From a production standpoint, closed face match mailings are more expensive to produce and require a high level of quality assurance compared to a direct mail package with a window envelope. After all, you wouldn’t want to open an envelope addressed to “Marc Davis” with salutation of “Dear Margerie Smith:” But quality assurance should not stop with matching the letter to the envelope – it includes all aspects of production at the lettershop.

Learning: Be sure the quality of production is as good as the rest of the effort put into your direct mail.

In addition, consider the hours you would have inbound telemarketing agents available relative to the product sales proposition. The response form mentions that salespeople are not available at off-peak times. Ironically, it appears just above a call-out for 24/7 Concierge Service. It may be cost-efficient in a vacuum, but does not having any salespeople available for customers on Sunday properly reflect the product or brand?
Posted by Marc Davis No comments:

Does your old mailer have to look old? 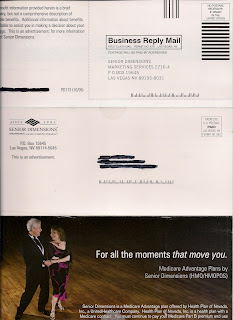 This self-mailer arrived in the mailbox of a 69 year old man in Nevada. We’ll call him Bob. Bob and his wife enjoy bowling, traveling, and hiking in the mountains. He works out at the gym every day. But he does not go ballroom dancing – no, dancing is for old people.  It was something Bob’s father did at Century Village in Florida. In fact, he doesn’t know of a place to go ballroom dancing anywhere in his city, nor does he have any friends who dress up to go dancing. (However, he does know of a few people his age that like to hit the disco or go to a Rolling Stones concert.)

So when the self-mailer arrived in his mailbox, Bob didn’t bother opening it. The picture on the outside did not resemble his lifestyle, so why bother reading the words? Had Bob opened the mailer, he would have seen a picture of someone old enough to be his mother.

The mailer appears to be directed at anyone in the Medicare age group, e.g. 65 or older. From a mailer’s point of view, it is easier to have one creative than several. But why use a visual that would deter a sizeable portion of the target market? Instead, the Health Plan of Nevada should have used a better picture, no picture at all, or consider segmenting the list by age.

Learning: Define and understand your target market when choosing pictures and visuals. Choose a visual that relates to the customer, or avoid one altogether.
Posted by Marc Davis No comments:

Is the US Postal Service an eagle or turtle? Regardless, mail early. 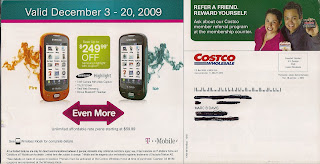 CostCo sends coupon self-mailers every 3 to 5 weeks. In my personal experiences, they consistently arrive in my mailbox about a week before the coupons are effective.  In fact, I occasionally see customers trying to use coupons at the store before they are valid.

So when the coupon mailer with coupons valid December 3-20 arrives in my mailbox on December 7, something is clearly wrong.  It means that CostCo missed a weekend of high-volume Christmas shopping by either mailing late or allowing the USPS to deliver slower than usual.  The address panel even has a request “Postmaster, please deliver between Nov. 28 and Dec. 1, 2009.”

I can only guess what happened, and my guess is that the US Postal Service is delivering standard rate mail slower than usual because of the holiday volume of packages, priority mail, and first class mail.  Regardless of why the mail is late, late delivery is a Fail.

Learning: Prepare for the holiday season and compensate for prolonged delivery times by mailing early.
Posted by Marc Davis 1 comment:

Can’t save money that isn’t there

The person receiving this letter had a 401-k account through his employer administered by Fidelity. A few weeks after he left the job, he moved the 401-k balance to a Rollover IRA with a discount broker. That took place a full month before this letter arrived from Fidelity. 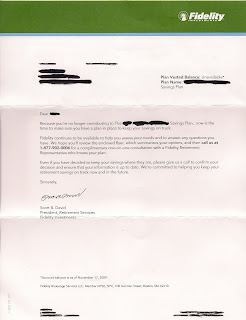 Creatively, the message is on target. The outer envelope teaser cites information in the letter.  Interior lettercopy takes the tone of a consultative and informative soft-sell with a call to action to speak to a Fidelity Representative to help the customer.

However, the “Vested Balance” remaining when the letter was produced was zero, which is why the balance listed on the upper-left corner is “Unavailable”. So there was no point to Fidelity sending the letter – the customer made his decision. In this case, never is better than late.

If Fidelity is ensuring customers keep their money there after employment ends, a letter like this should mail when still relevant to the customer, e.g. 2 weeks after the key event – not 2 months. When preparing production, customers with no balance left in their 401-k should be dropped from the mailing.

Learnings: When sending an event-based letter, time the mail to arrive when relevant to the customer. Before sending a mailing, include a step to drop from the mailing list customers where the message is no longer applicable.

Is Late Better than Never?

You’re a Marketing Manager working on the next campaign when you get that call from Production. “There’s a problem,” the production manager says, trying to sound as neutral as possible. The paper for your mass mailing didn’t arrive at the printer. The printer’s press went down. There was a freak snowstorm at the lettershop. Or something else totally random that will set your mail drop back a few days. There is no slack time left in your execution schedule because the creative agency didn’t listen to your instructions – for three rounds. You know your production specialists and vendors are doing everything they can, but that still leaves you with a choice: mail late, or abort.

Perhaps these two mailers were in this situation and chose to go ahead with the mailing. After all, much of the preparation costs are already sunk so the incremental cost is not much more than postage. Some response is better than none, right? It’s also possible that everything mailed on time but the US Postal Service delivered your mail even slower than anticipated. Still, these two mailings get a fail for arriving after Thanksgiving.

A Thanksgiving donation message that arrives after Thanksgiving is late. This solicitation from Three Square arrived in the recipient’s mailbox on 11/29. By that time, it should have had a Christmas theme. 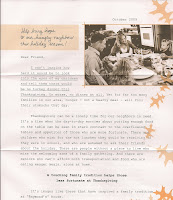 Learnings: Plan ahead for production delays. Mail on time, even a bit early. If you cannot mail on time, consider when it’s appropriate to cut your losses and not mail.