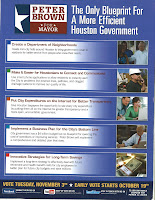 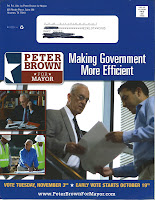 Fail: List
The election for mayor is heating up in Houston. We have 4 major candidates with no explicit party affiliation. To get their political message to voters, candidates often use direct mail. This piece from Peter Brown's campaigh demonstrates using mail as a part of an integrated direct marketing mix including a web site, facebook, YouTube, twitter, and SMS.

So why is this a Fail? Because I received the same piece twice on the same day, both addressed to me. One could joke that someone communicating “Making Government More Efficient” should starting by doing a dedupe of the contact list.

Learning: Dedupe your list so you don’t mail to the same voter twice.
Posted by Marc Davis