With mail, there are many second chances but only one Last Chance


A follow-up mailing that arrives in home two weeks after the initial mailing will lift overall response.  The amount of the lift varies depending on the product or service. In mailings I managed, the lift varied from 20% - 100%.  An effective remail assumes the customer saw the first mailing, so it should reinforce the same benefits with a modified message. 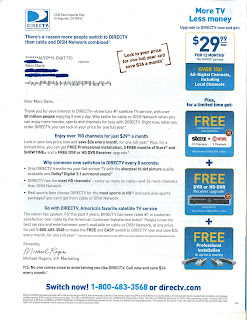 An effective remail approach is shown in this DIRECTV interest follow-up letter.  The same features of the Choice package are highlighted, however the Johnson Box, opening, and some body copy changed from the original. There is also a different phone number, allowing DIRECTV to measure raw inbound response from the mailing.  (They could also consider a speicific URL on the remail, allowing them to measure online response.)

The local radio station also followed-up it's self-mailer with a postcard offering free shoes on Tuesdays – still showing only shoes for women –  but using different pictures.

The Fail goes to Money Magazine for these mailings I received that arrived within days of each other: 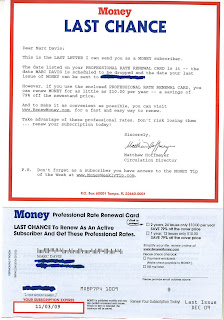 Both use the exact same outer envelope, layout and copy, word for word.   Both of them tout “LAST CHANCE” even though one is really the second-to-last chance. The only difference is the respond-by date.  And they actually arrived the same week.

A better use of the Money's money would be for the both letters to use a similar creative template but the first mailer have a core message of “Time is Running out” and the follow-up mailer include the “Last Chance” message. Or better yet, use a low-cost e-mail to communicate the same message timed to arrive around the same time as the mail.

Learnings: If you use a 2-drop mail tactic:

• Time your maildrops so that maildrops arrive two weeks apart, not on top of each other. 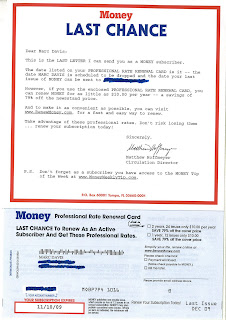 • Don’t insult the customer by claiming a final opportunity for your product when it really isn’t.

• Differentiate the creative but maintain the same core messages so that the second letter reinforces the first one.

• If your have an opt-in e-mail list, coordinate the timing of communications so that one channel reinforces the message of the other channel.