AT&T repeats it's Fail ... and gets worse

This piece from AT&T arrived in my mailbox 2 days ago. It is similar to another AT&T mailer I evaluated in October. Albeit 3 months apart, AT&T considers it a remail -- it references the prior communication in the post-it note Johnson Box.  Personally, I doubt the typical recipient remembers an offer letter from that long ago. 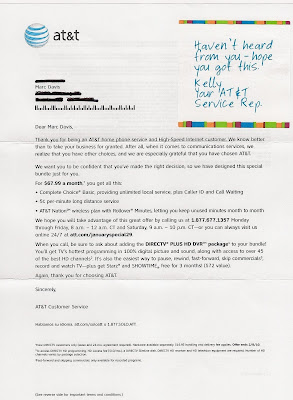 In addition to meriting the same Fails for burying the call to action and response, lack of focus on benefits, selling multiple services in one letter, using a landing page that leads with an offer different from the one in the letter, this letter gets Fail for

• Lack of personalization. The post-it note on the upper left is signed from ‘Kelly’, my AT&T Service Rep, but the letter is signed by the impersonal monolithic “AT&T Customer Service”.  The October letter was signed by someone important in the organization.  At the very least, Kelly's signature should be included.

• Not having any P.S. at all. In lieu of one of the most tried and true successful direct mail letter techniques is an in-language reference.

Both letters merit an additional Fail for the in-language reference, because I provided my preferences to AT&T, so “Kelly” should know my preferred language is English and leverage it's own in-house data.  (As I write this, the in-language link does not even work.)

Learnings: Personalize a personal communication. Use the customer-provided language indicator in your own database. Be sure all URLs are fully functional before mailing a letter.
Posted by Marc Davis