Is this my last chance? Really, truly? 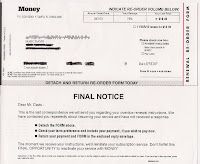 I commented before on Money Magazine’s double use of the same Last Chance creative. I received two more that were different from the original, but the same as each other. Here is one of the two:
The package also included a reply mail envelope.
The Fail here is again for Creative by claiming this is the Final Notice, twice and after mailing two other packages also marked ‘Final Notice.’  Rather than building upon the prior contacts, the overuse of too much urgency makes each one less responsive.  One alternative would be to include the sequence in the creative.  For example, the second notice could have been marked 'Second Notice' and the third mailer could have been marked 'URGENT.  Third notice', which would both lead to the true 'Final Notice'.
Learning:  In a multi-touch contact strategy, coordinate your sequence of messages to make each one stand out and be believable.
Posted by Marc Davis