If at first you don’t succeed, don't repeat the Fail

In January, I evaluated a solo mail package from a local contractor.  Two months later, the exact same package arrived. The only changes: the date and the stamp on the outer envelope is a bit more straight, the date on the top of the letter, and Mr. Briggs claims a 48th year of experience. 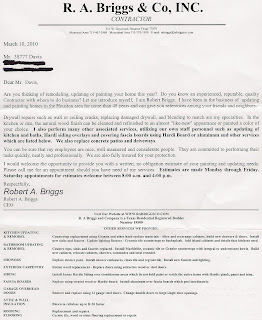 In addition to the several Fails for Creative listed earlier, this package likely has an additional Fail for repeating the same letter exactly the same way twice. Resending a letter months later with no changes is not a typical Fail – a good creative can be mailed over and over again. In direct mail jargon, an optimized successful direct mail package is called a “Control”. The Control package is proven to be successful by testing against other packages that have different offers or creative format. If one of the package with the alternate offer or creative garners more response, then that becomes the Control. In other words, the Control is the one to beat in terms of getting response.
However, a package that is used multiple times without proving it’s success rate is not a Control. It is simply doing the same thing over again and expecting a different outcome.

Learning: Modify your base letter once in a while and test against your Control package frequently to improve long-term results.
Posted by Marc Davis