A letter from the Central Bureaucracy! 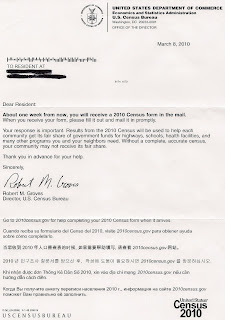 The letter explains that we will soon receive a Census form in the mail. It requests that we should promptly complete the form when it arrives so our community gets money from the government. (I was taught by my political science teacher in grade school that the purpose of the Census was to ensure that my state received the correct allocation of representatives in Congress. However, for the moment, let’s set aside the political discussion and consider this as a solo direct mail solicitation.)

Presumably, the purpose of the advance letter is to improve the response rate of the upcoming Census mailing. However, someone who would not open the Census mailing envelope to come would also not open the envelope for this advance mailing. In other words, the advance letter is not worth the cost. If an advance mailing is necessary, use a postcard. It has a greater likelihood of being read by potential non-responders.


If a solo envelope mailing is really necessary, consider adding a bit of spot color to make the piece visually appealing, e.g. not look like it arrived from a central bureaucracy. Color the Census 2010 logo in blue or even knock-out white over black if production cost is a concern. 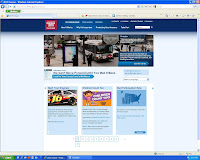 The personal feel of the letter being signed by the director is positive, as is the closing postscript repeated in several languages prominent to the area. Given the information on the landing page, though, the call to action in the postscript should read, “Go to 2010census.gov for more information” rather than, “...for help completing the form when it arrives.” As of March 11, it is unclear on the Census landing page where to find help to complete the form. (However, it is clear where to find Dora the Explorer.) Thus, a second Fail. Perhaps the link will gain more prominence when the forms actually mail – if the Census team has made a plan to do so.


Lesson: If your call to action does not involve an immediate response, consider whether the vehicle will be cost-effective. When you mention a Web page in your direct mail, be sure that the landing page directly and seamlessly aligns with the stated reason for the recipient to go online.
Posted by Marc Davis

Well thought out. Thank you for these posts.