Fail: Creative
These two solo mail cross-sell packages recently arrived at the same home a couple days apart from each other. The recipient has Comcast for cable service and AT&T for landline phone service and internet. This person has a different company for mobile phone service.

The letter from AT&T is stamped. The return address on the back includes the company name and logo. The letter inside also includes the logo and is addressed personally to the recipient. 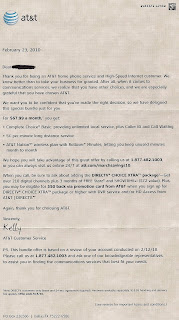 I reviewed fails of a similar creative package from AT&T -- selling multiple products in one letter and other creative missteps -- but what AT&T does right with their mail is they recognize the value of their brand, leveraging their customer relationship, and addressing the relationship. Since my review of AT&T's second fail, AT&T improved the letter creatively by personalizing the signature and reinforcing a call to action in the postscript. Overall, the letter feels personal.


The strong aspects of AT&T’s letter highlight the Fails from Comcast:

Lesson: You cannot build a personal relationship by being impersonal. It is important not only to know your customers, but to address them personally as customers. Communicate to them as people and persuade them that you want to address their needs.
Posted by Marc Davis